I read Toni Morrison’s The Bluest Eye for the first time when I was 14 and my tears brought my father to my bedroom door to ask what was wrong. My dad, who prefers spy thrillers, said “It’s just a story, don’t let it upset you so much.” I wanted him to understand, so I read passages from the story aloud to show him that it wasn’t just a story: it was about the inequity and longing that I was reluctantly beginning to understand came with being alive. He was silent as I read: “The soil is bad for certain kinds of flowers. Certain seeds it will not nurture, certain fruit it will not bear, and when the land kills of its own volition, we acquiesce and say the victim had no right to live. We are wrong, of course, but it doesn’t matter. It’s too late. At least on the edge of my town, among the garbage and the sunflowers of my town, it’s much, much, much too late.” I don’t recall what he said in response, but when we went to the library to return our stack of books, he checked out The Bluest Eye again so he could read it himself.

I imagine many people have similar stories about reading Toni Morrison for the first time. My English class read The Bluest Eye for Black History Month, and I think about it every February, which is also the month of Morrison’s birth. There’s a lot to celebrate this month—not only is Morrison healthy and writing at 84, her eleventh novel God Help the Child will be published in April. The February 9 New Yorker published an excerpt that begins with these lines: “It’s not my fault. So you can’t blame me. I didn’t do it and have no idea how it happened. It didn’t take more than an hour after they pulled her out from between my legs for me to realize something was wrong. Really wrong. She was so black she scared me.”

The Bluest Eye (1970) was Morrison’s first novel, written after leaving her husband and a teaching career, and while working as an editor at Random House. Morrison found both her voice and confidence as a writer after deciding to live on her own with her sons and focus on storytelling. It took her awhile to let go of external perceptions of who she could be and accept who she was. In a 1993 interview with the Paris Review she said, “I only know that I will never again trust my life, my future, to the whims of men, in companies or out. Never again will their judgment have anything to do with what I think I can do.” 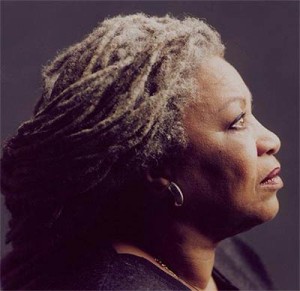 Her literary contributions are incredible—Sula (1973) was nominated for the American Book Award; Song of Solomon (1977) was the first work by an African-American featured in the book-of-the-month club since Richard Wright’s Native Son; and Beloved (1987) won several literary awards, including the Pulitzer Prize. Morrison became a professor at Princeton University in 1989 (she’s now professor emerita) and the first African-American woman to win the Nobel Prize for literature in 1993. Morrison’s novels are frequent targets of censorship and she served as editor for Burn This Book, a collection of essays on censorship and the power of the written word published in 2009.

In addition to her soon to be seven other novels, she has written essays, children’s books, songs, operas, and a play. Morrison’s only published short story “Recitatif” is in our Great Books anthology The Civically Engaged Reader and interpretive discussion questions for Song of Solomon are included in our anthology Living With the Past.

I’ll never tire of Morrison’s voice, no matter the medium. If you haven’t read her 2004 Wellesley commencement speech, “Be Your Own Story,” chosen by NPR as one of the best commencement speeches ever, I highly recommend you check it out. The following excerpt makes me grateful that she found her voice and continues to graciously share it with us:

“Nobody has the exact memory that you have. What is now known is not all what you are capable of knowing. You are your own stories and therefore free to imagine and experience what it means to be human without wealth. What it feels like to be human without domination over others, without reckless arrogance, without fear of others unlike you, without rotating, rehearsing and reinventing the hatreds you learned in the sandbox. And although you don’t have complete control over the narrative (no author does, I can tell you), you could nevertheless create it.”

Sharon Crowley works in marketing & has been a Toni Morrison fan since she cried reading The Bluest Eye.