Over the three days that I sat and read the 18 selections in “Immigrant Voices: 21st Century Stories,” I felt an ever-surging need to talk to somebody—really talk to somebody—about these moving and important half-dreams/whole stories. These pieces by haunted and haunting writers. These suggestions regarding arrivals, wranglings, stayings, leavings, never-quite-belongings. This chorus of yearning, of not finally settling, of divisions of heart, home, faith. 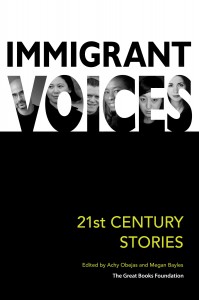 These stories illustrate what it is to have gone from one place to another, to have looked back over your shoulder. Consider one called “Absence” by the Peruvian-born Daniel Alarcón

Leaving is no problem. It’s exciting, actually; in fact, it’s a drug. It’s the staying gone that will kill you. This is the handed-down wisdom of the immigrant. You hear it from people who wander home, after a decade away. You hear about the euphoria that passes quickly; the new things that lose their newness and, soon after, their capacity to amuse you. Language is bewildering. You tire of exploring.

In the story “Grandmother’s Garden,” by Indian-born Meena Alexander, there is this:

You swear to belong. You fear you will never fully belong. But who could have guessed how fierce it is, this longing to belong.

She nods, her little girl’s face vacant. It is probably her son she misses, or the father. Or our whole country, which you never think of until it’s gone, which you never love until you’re no longer there.

In “No Subject,” Carolina De Robertis, offers this:

Do you know what it’s like, to be gone from your country for so many decades that you start to think you dreamed the whole place up?

Divided into three sections—“Coming Over,” “Being Here,” and “Going Back”—the 18 selections are by writers, as Obejas and Bayles note in their preface, who “see themselves as transnational, bicultural, diasporic, global.” Each piece arises from a refreshingly unique point of view; no two writers in the collection share the same country of origin.

Stylistically, there is welcome range as well—from the prose poetry of Alexander to the wild bee fantasy of Hemon to the elaborate fictions of Khakpour’s story about a boy who accompanies his Iranian grandmother (“Mother the Big”) to the United States where absolutely nothing will destroy her, even all the terrible things she does to herself.

Danticat’s “Hot-Air Balloons” is a seemingly straightforward story about a wrong affair and an assault to a friendship—but it takes a surprising turn. Lara Vapnyar’s “Fischer vs. Spassky” is a remembered story about choice—to leave Russia or to stay—that dials forward in time, in devastating fashion. Halfon’s “Bamboo” seems like a simple-enough tale about an immigrant’s trip to the beach in Guatemala—until we reach its dark, Kafka-esque end.

The stories are thrilling on their own. As a collection they zing—serving, I think, The Great Books Foundation particularly well in its quest to produce books that get people talking through “shared inquiry.” Questions for discussion are provided in the back. Brief biographies of each author introduce each story. The preface provides a short history of immigration tales.

In any collection, at any time, these would be welcome stories. But in a world presently being brutalized by new annexations and divisions, new fears about foreigners and strangers, new rules at borderlines, “Immigrant Voices” is a book that matters right now.

Beth Kephart is the author, most recently, of “Going Over,” a young adult novel set in Berlin, circa 1983. She blogs daily at www.beth-kephart.blogspot.com.