Imperfect Ideal is here! We’re excited to announce our newest title and to add it to the list of excellent books and films that talk about the themes of utopia and dystopia. With Imperfect Ideal, Great Books joins the conversation! There’s obviously a lot to talk about, but an interesting question to ask is why people continue to vividly explore what perfect or hellish societies might look like.

The idea of average citizens outlining what they deem social perfection is not a new one; in Classical Greece we see Plato’s Republic. Fast-forward to 1516 when Thomas More published Utopia. The list of these works is long, and it continues through today with the explosion of dystopian literature aimed at teens. Look at hugely successful series such as Maze Runner, The Hunger Games, Divergent, and Lois Lowry’s The Giver: readers young and old (myself included) are entranced by these tales. What is so compelling about reading literature set in terrifying, post-apocalyptic futures? Moreover, what drives people to take this a step further and attempt to create utopian states?

Now it’s one thing to let utopian ideals capture one’s spirit, and another thing entirely to put them into practice. I can’t talk about all the books and films that exist on these themes without mentioning actual, real-life instances where regular old humans tried to create their own utopias right here on earth.

Utopian societies were all the rage in 19th century America. The emerging intellectual middle class had become disillusioned with capitalism and sought a new life, free of the pressures of industrialization and urbanization. Small communities with self-defined utopian ideals cropped up in rural areas, and believers moved right in. Typically, people lived communally and subsisted off the land. Of the many utopian communities in the United States during the 1800s, I want to highlight New Harmony in Indiana; it was founded by social reformer and wealthy industrialist Robert Owen in 1824 (a selection from his New View of Society begins on page 233 of Imperfect Ideal). He purchased the entire ready-built town of Harmony on the Wabash River in order to create a model for what he called “A New Moral World.” His main goal was to foster a “superior social, intellectual and physical environment” based on his ideas of how society should function. Some of his ideas were: 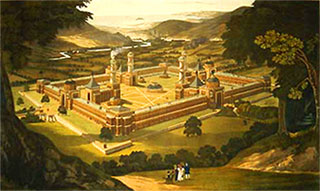 to serve as a model for social reform. Owen created the settlement in 1825 and invited “any and all” to join him. He then left it in the care of his son while he returned to the eastern states to recruit top educators, reformers, and scientists. Owen gathered some leading intellectuals to return with him, and in 1826 they arrived by boat which they named, fantastically, “The Boatload of Knowledge.” However, upon arrival, said “Boatload” found  New Harmony in chaos. The approximate  800 residents weren’t doing so well without a leader or adequate law enforcement. The underlying issues with the settlement had surfaced during Owen’s time away, and the main problems were:

This all sounded great, but Owen and his fellow citizens never outlined how this would be implemented. By 1827, the once-utopian settlement of New Harmony was no more. During its brief lifespan, however, it became “a scientific center of national significance, especially in the natural sciences.” That’s pretty impressive, considering it only lasted for two years. For more details on the scientific advancements that came from New Harmony and its citizens, check out its Wikipedia page.

So there you have it, a very brief outline of a unique slice of American and literary history. We invite you to check out the full table of contents for Imperfect Ideal and to download our free discussion guides for other topical books and films. And if you’re still looking for more, here are a few more attempts at utopias worth mentioning:

Oneida Community (est. 1848), a religious commune that held many beliefs considered outlandish at the time, including free love (defined as “complex marriage”) and liberal views toward women’s rights. While the commune no longer exists, Oneida, Ltd. is still making silverware!

The Amana Colonies (est. 1859), established by a group of strict religious emigrants from Germany who called themselves the “Community of True Inspiration.” They functioned in isolation from the outside world until 1932, when financial troubles due to the Great Depression forced them to relax some of their restrictions and establish a revenue stream.

Audrey Schlofner works in marketing at the Great Books Foundation. She has an art degree & designed the cover of Imperfect Ideal.