Faith Zavon of Cincinnati, Ohio, recently called the Foundation to report that she had formed a new Great Books discussion group. Faith had been away from Great Books programs for years. “I just missed it too much,” she says. “Participating in Great Books has been the most valuable experience of my life.”

“[Great Books] changed my life completely,” Faith adds. “It made me a better writer, a better parent, and a better person. It taught me to talk to my children more thoughtfully, and it made them more thoughtful, too.”

Now retired, Faith was born in Brooklyn and graduated with a BA in science from Brooklyn College. She married and raised four children, working over the years as a food chemist, a bacteriologist, a court reporter, and a legal secretary. She also taught a course in logic at the University of Cincinnati. 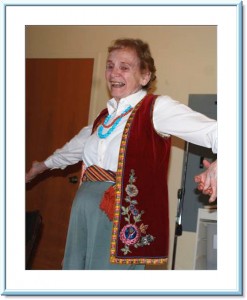 Along with Great Books, another pillar of Faith’s life has been folk dancing. Faith taught folk dancing for almost her entire life, beginning in her late teens. Like Great Books, folk dancing is a lifelong passion. Faith has also studied different ethnic groups throughout her life, and she wrote a series of articles about ethnic groups for the old Cincinnati Post. She also authored a cookbook of Eastern European recipes.

Since returning to Great Books, however, most of Faith’s time now goes toward reading and writing questions for her group’s discussions. “Reading is my primary concern,” she says, adding with a quick laugh, “after eating!”

Faith’s group met monthly last winter from January through April, and has fifteen participants so far. The group makes a point to gather around an oblong table, because, as Faith says, “you don’t think as well sitting around in a living room.” So far, Faith’s group has discussed four dialogues by Plato—the Apology, the Crito, the Euthyphro, and the Phaedo. The group is already talking about writing questions for four selections from Great Conversations 2 for next year.

“How my life has been enriched by folk dancing and Great Books,” Faith reflects. “It’s like the Phaedo—they nourish both the body and the mind.”

This September, Faith will be 91.