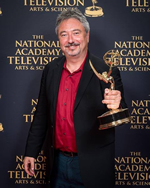 We’re fortunate to have a talented staff and we enjoy celebrating each other’s personal artistic accomplishments, especially when they reflect the power of narrative. Right now we’re cheering for our colleague Bill Siegel whose documentary, The Trials of Muhammad Ali, won an Emmy on September 28 in New York City. The film, broadcast by PBS in the Independent Lens series, covers the period of the boxer’s life when Cassius Clay became Muhammad Ali, and when his conversion to Islam and refusal to serve in the Vietnam War left him banned from boxing and facing a five-year prison sentence.

The Trials of Muhammad Ali also won awards for best use of archival footage from The International Documentary Association and was nominated for an NAACP Image Award. It screened in theaters around the world and is currently available on DVD, iTunes, and Netflix.

You can watch the trailer and learn more about the film here. Bill’s previous film, The Weather Underground, was nominated for a 2003 Academy Award for best documentary.

Bill is a veteran Great Books staff member with over 20 years of experience. He’s a professional learning consultant who trains educators how to use Shared Inquiry™, and—it should go without saying—he’s our resident video content developer and producer.