We were excited to hear Israeli Consul General Roey Gilad speak again last night at the Commemoration of Israeli-German Relations. This former With Malice Toward None panelist and his peers celebrated and discussed the last fifty years of diplomatic relations between Germany and Israel. Last night’s panel included (pictured from left to right in the photo):

Thanks for letting us celebrate this significant occasion with you!  Read more about upcoming events celebrating 50 years of diplomatic relations between Germany and Israel. 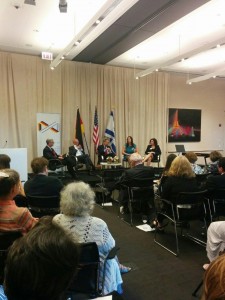